Theolballgame periodically pays tribute to the underrated, overlooked, and long-forgotten from a bygone era of athletics, by highlighting their careers. Here is an examination of the life and career of the middleweight boxer Tony Zale.

Anthony Florian Zaleski was one of the best boxers most people have never heard of. Born in the steel town of Gary, Indiana to Polish-American parents in 1913, he would later remark that it felt like he’d been in the steel mills “since I was weaned.”

When Anthony was two his father died in an auto accident as he was out getting medicine for his sick son. Anthony felt somewhat responsible for his father’s death and attributed his lifelong shyness to that fact.

Anthony left the steel mills to turn pro in boxing in 1934. However, his career got off to a rough start and he went back to the security of the mills a year later. Always looking for a way out, though, he left the mills for good and re-entered the ring in 1937. 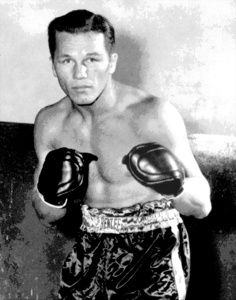 He shortened/Americanized his name to Tony Zale and because of his background, as well as his penchant for enduring punishment in the ring, he acquired the nickname “Man of Steel.”

Zale gained a reputation, not just for withstanding beatings in the ring, but for rallying to win fights he was obviously losing by unleashing a barrage of heavy body blows that slowly wore his opponents down. He captured the middleweight championship in 1940.

His boxing career was put on hold for five years during World War II as he served in the Navy. Zale’s most memorable matches were a brutal trilogy of fights against Rocky Graziano, with all three occurring over a twenty-one month span.

The first match was in Yankee stadium in September 1946. Zale knocked Graziano down in the first round, then received a terrible beating for the next five rounds before managing to knock Graziano out in the sixth round.

The second match took place in Chicago in July of 1947. Again the fight lasted six rounds, but this time Graziano was the aggressor, battering Zale around the ring before knocking him out.

Their third match took place in New Jersey in June of 1948. This time Zale uncharacteristically took the offensive and knocked Graziano out in the third round. (This was the only one of the three fights caught on film and can still be seen on YouTube).

Despite defeating Graziano twice and regardless of their similar records (67-18-2 for Zale) and (67-10-6 for Graziano), Zale is barely remembered by boxing fans, despite being one of the “ten best punchers in boxing history,” according to Ring Magazine.

In 1956 Zale was cast as himself in “Somebody Up There Likes Me,” but was fired after reportedly knocking Paul Newman out during filming.

From 1949-1970 Zale was the head boxing coach at the Chicago Catholic Youth Organization.

Tony Zale is a member of both the International Boxing Hall of Fame and the National Polish-American Hall of Fame. He passed away in 1997 from the effects of Parkinson’s and Alzheimer’s.

The “Man of Steel” escaped the mills of his youth, conquered the ring by twice becoming world middleweight champion, and then gave back to his community and to the sport that had given him so much. Tony Zale: a true champion of life and sport.