In honor of black history month theolballgame will highlight the lives and careers of influential and pioneering black athletes.

Jackie Robinson broke the color barrier in Major League baseball in 1947. The Robinson story is well documented and remembered, and rightly so, however, for decades prior to his breaking into the game, African-American players were relegated to the rosters of town teams, independent leagues, and the Negro League.

It was the formation of the Negro League by Andrew Foster and the success of its players, against other black teams, as well as against all-star squads of white major leaguers, that ultimately led to integration. As John Holway argues in his book Voices of the Great Black Baseball Leagues, “without Rube Foster’s historic achievement, it is fair to say, black baseball might not have survived for another quarter century, and the nation might never have heard of Jackie Robinson.”

Andrew “Rube” Foster was born in Texas in 1879. He quit school after the eighth grade to try and earn a living playing baseball.

As he grew to be 6’2” and 200 pounds Foster bounced around between several independent teams in Texas and on the East coast. In 1905 he caught on with the Cuban X-Giants, one of the top black teams in the country.

Foster was a dominating power pitcher and compiled an astonishing 51-4 record in 1905. (However, statistics were not kept or compiled as meticulously in 1905 as they are now, especially concerning black teams, and some recent research suggests Foster’s 1905 record may have been a somewhat more modest 23-5). 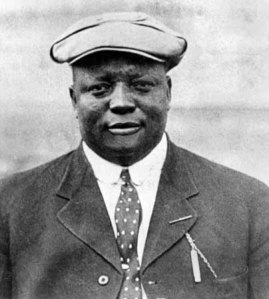 By 1910 Foster was playing for the Leland Giants in Chicago. That year the Giants went 123-6 and in the off-season Foster partnered with John Schorling, the son-in-law of Charles Comiskey, to buy the team. They renamed the team the American Giants and Foster agreed to manage them.

In 1911 the White Sox moved into Comiskey Park and the American Giants moved into the now vacant South Side Stadium. As owner, Foster insisted on a high level of professionalism from his team, he set strict rules concerning both personal conduct and appearance.

As manager, partly due to his team’s new spacious park Foster promoted a style of play based on the fundamentals of the game. Power pitching and defense were hallmarks of his teams, as was the ability to bunt, and speed on the base paths.

In 1920 Foster founded the Negro National League and six other clubs throughout the Midwest joined in. Formation of the league legitimized black baseball. Member clubs now had a more concrete schedule and at least the possibility of larger gate receipts and steady pay. The Negro Southern and Eastern Leagues were created soon after.

Foster’s American Giants won the first three pennants of the Negro National League. Despite the success of the team he owned and managed, the fledgling league continued to be beset by economic woes. Foster was known to wire money out of his own pocket to rival teams to help them meet payroll. He also frequently traded his own players to keep a competitive balance in the league.

In 1926 Foster suffered a mental breakdown, perhaps as the result of prolonged exposure to a gas leak, and was admitted to an asylum in Kankakee, Illinois. He died in 1930.

Considered “The Father of Black Baseball” Andrew “Rube” Foster had an impact on the game as a player, manager, executive, and pioneer. He was elected to the Baseball Hall of Fame in 1981.