Despite their exclusion from professional leagues there were two athletic avenues where African-Americans excelled in the late nineteenth century and for the first half of the twentieth century, boxing and horse racing.

African-American fighters and jockeys were undeniably talented, but their inroads in these sports was also due to the fact that rich white men of the time could make money off of them. Boxing promoters and trainers, as well as horse owners, could make money with a single African-American athlete without alienating the rest of a team or an entire league, as in other professional sports.

Isaac Murphy, the most dominant jockey of the era was born on April 16, 1861, four days after the Civil War started, in Frankfort, Kentucky. His father, a free black man, joined the Union Army and was eventually captured and held as a prisoner of war at Camp Nelson.

Upon receiving word of his father’s death in 1863, Isaac and his mother moved to Lexington, Kentucky, where she worked at the racing stables.

At age fourteen a horse trainer, noting Murphy’s small stature, taught him to ride. After some immediate success in small, local races Murphy devoted himself to the sport. Although somewhat unorthodox at the time, Murphy found he got better results out of his mounts by urging them on with words and his spurs, rather than with the whip. 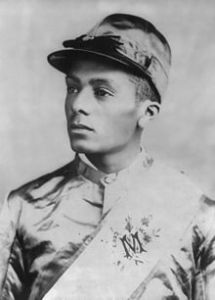 Unfortunately by 1895 his weight and rampant alcoholism caught up with Murphy and he was suspended for racing while inebriated and ultimately chose to retire. He died a year later in 1896.

Through his on-track exploits Isaac Murphy, an African-American, was able to carve a place for himself within a society dominated by the White population. He rode his way to fortune, fame, and a place in history as one of the greatest jockeys ever.