The first three rounds of the NFL draft have become a spectacle, with the commissioner making the first couple picks amongst much fanfare. Rounds four through seven, though, are an afterthought-to the extent that the last overall pick has become known as Mr. Irrelevant.

While the commissioner calls out the names of a few instant-millionaires in the early rounds it is an elderly, distinguished looking gentleman by the name of Paul Salata who announces the selection of Mr. Irrelevant every year.

Salata, now 89, played at USC as a receiver and enjoyed a short professional career with the Colts and 49ers. He also starred in the 1951 film Angels in the Outfield and in 1955’s Stalag 17. 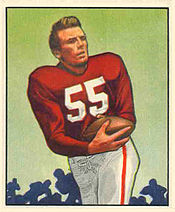 Following the 1976 draft Salata created Irrelevant Week, which gives the last pick of the draft and his family a weeklong stay in Newport Beach. The week includes a regatta, golf tournament, and roast of the player selected last. The event is also used as a way to raise money for charity and since its inception Irrelevant Week has raised over $1 million dollars.

A parody of the Heisman Trophy-the Lowsman-is also presented during Irrelevant Week. The trophy depicts a football player fumbling, seemingly fitting for the last pick in the draft.

While Irrelevant week is done in jest and for a good cause Salata explains that there should be no stigma attached to being the last pick of the draft. On the official Irrelevant Week website he explains that, “…it’s not a negative to be picked last in the NFL draft; rather, it’s an honor to be drafted at all. The last draft pick’s demonstration of perseverance is a lesson that resonates not only with NFL players and fans, but also with people everywhere.”

There certainly didn’t seem to be any negativity surrounding Kalan Reed, the 253rd and final pick, the Mr. Irrelevant of 2016 as he held up his Tennessee Titans jersey on Saturday night. He may be the butt of jokes for a while, he may not go on to NFL greatness, but the 5’11” 195lb cornerback out of Southern Mississippi just reached the pinnacle of the game he loves, and he grabbed a vacation in Newport Beach along the way.