In 1997 a London factory worker named Phil Shaw came home from work and realized the need to iron clothes for the rest of the week would prevent him from going rock climbing that evening. Not to be kept from his love of the outdoors, Shaw moved his ironing board into the backyard garden and enjoyed a pleasant evening ironing outdoors, and the extreme sport of ironing was invented.

A seemingly endless array of new sports or new twists on old games have sprung up over the past twenty years. Apparently slapping the word “extreme” on a leisure activity-or in the case of ironing-a chore, makes it more exciting and possibly even a sport. This extreme phenomenon encompasses a variety of activities from eating to jet skiing, wood-chopping, and now ironing. 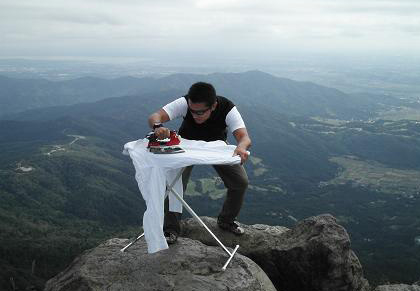 Extreme ironing is just that-ironing. Participants must iron a garment or some article of clothing while outside, usually while engaged in another activity-such as running, driving, rock climbing, or scuba diving.

According to the Extreme Ironing Bureau, “extreme ironing is the latest danger sport that combines the thrills of an extreme outdoor activity with the satisfaction of a well-pressed shirt.”

Despite a 2004 Rowenta Tour across the U.S. to promote the sport, extreme ironing has yet to really catch on in America. (Although the first formal American chapter of the Extreme Ironing Bureau was formed in 2013) A rather tongue-in-cheek debate rages among extreme ironers and novices as to whether the activity is indeed an extreme sport, or merely a performance art.

From a cynical American perspective-where we are used to the multi billion dollar enterprises of mainstream professional sports-extreme ironing may not seem the least bit real. However, the sport has a governing body, a tour series, and professionals.

Phil “Steam” Shaw came out of retirement after an eleven year absence from the sport he created in 2012 and ran a half marathon with an ironing board strapped to his chest, ironing along the way.

Extreme ironing has been the subject of a documentary and has been featured on ESPN. However, whether it is a sport/activity with staying power, or if it is ever able to crack the mainstream sports market remains to be seen.

In the meantime it is something that the average person can do, regardless of physical prowess. The next time you need to iron think about moving your pressing game from the laundry room to the great outdoors. We can’t all be Tom Brady or Mike Trout, but we can be champions of the extreme.