It has become part of the modern athletic uniform-neat black lines beneath the eyes or smeared all over the face like an ancient warrior of yesteryear-eye black. What is the reason for this athletic custom, though? Who first thought it would be a good idea to rub grease on their face before playing a game? Does the modern athlete don eye black to look cool and instill fear in their opponent, or are the supposed glare-reducing properties of eye black that significant?

Babe Ruth smeared burnt cork under his eyes before afternoon games as early as the 1920’s-reportedly to reduce irritating glare while playing hungover. However, Andy Farkas (1916-2001), a football player in the 1940’s is considered the father of athletic eye black. 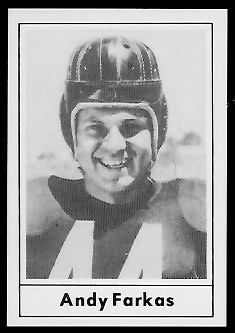 Born in Toledo, Ohio Farkas was such a gridiron star at St. Johns High that when the family moved to Detroit the Priests at his old school called the University of Detroit Jesuit High and made sure they had a spot on the football team for him.

After high school Farkas starred at the University of Detroit Mercy. In 1938 he was drafted by the Washington Redskins. As a halfback and wide receiver he was quick-footed and sure-handed. From 1938-1944 he amassed 2,103 rushing yards, 1,086 receiving yards, and scored 37  touchdowns.

A solid, hard-nosed player typical of the early NFL Farkas touched the football 774 times during his career and remarkably only fumbled once. During the 1942 season he was photographed playing while wearing eye black (this photo is believed to be the first instance of eye black being worn in the NFL). Farkas retired in 1945 after playing one season with Detroit.

Eye black has evolved with sport in America and is now ubiquitous from high school to the pros. Gone, though, are the burnt cork days of Ruth or Farkas, as today’s eye black is a beeswax and paraffin concoction. Modern athletes also have the option of applying their eye black in breathable synthetic strips.

In perhaps the greatest sign that eye black has become ingrained in sport and culture is that multiple universities have studied it. Both Yale and the University of New Hampshire have conducted studies on the real-world problem of whether eye black is effective or not.

Athletes looking for an edge or to intimidate will continue to smear on the eye black-whether it makes a difference or not. In the process the career of an early NFL great will continue to be indirectly celebrated.

A tin of Original Farkas Eye Black sells for $14.95 online.